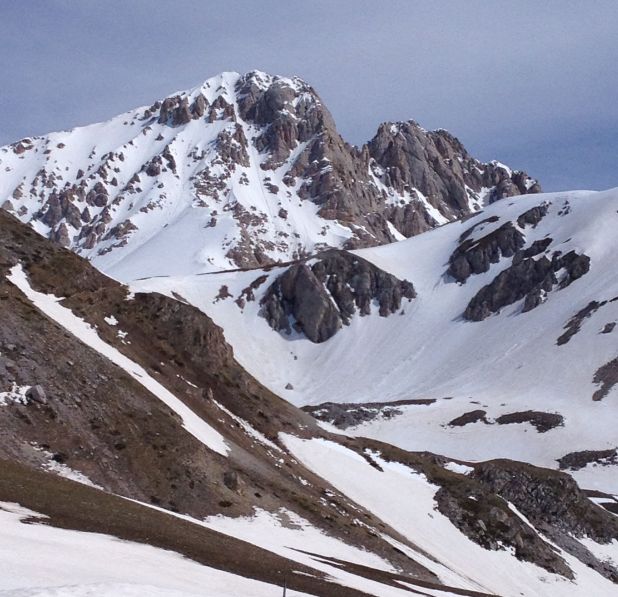 After a week in the Le Marche region, we navigated the picturesque local roads heading south, to the dramatic Abruzzo Region. We are visiting the Abruzzo region for the first time to explore several of their beautiful parks for hiking. Our first stop is the Gran Sasso Park, known for the highest peak in the Italy, Il Corno Grande. 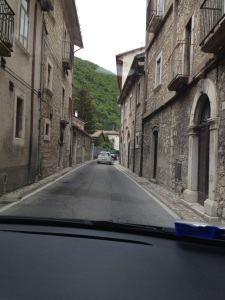 Our form of navigation is the old-fashioned way—with maps and common sense. Sometimes we argue a bit, and sometimes we stop and ask the old guys on the corner which way to go. Often, we have our doubts, when we find ourselves driving through a tiny town on a road that is just wide enough for one car. But, when we end up on the right road, we have a nice feeling of accomplishment. Luckily, the smaller highways in the Abruzzo region are not crowded in late spring. So, we don’t have too many problems when we have to make a U turn and start over again.

Our first stop is the small town of Assergi, which is the closest location for visiting Il Corno Grande. We actually stayed in a comfortable hotel (Hotel Nido dell’Aquila) just past the funicular, outside of town. It was a perfect location—an easy walk to the funicular and a quiet spot at the base of the mountain. They also have a great restaurant onsite.

Our main purpose for this stay was to hike up to the top of Corno Grande (Bob’s idea, not mine). However, we arrived a bit early in the season, and there was a bit more snow than we anticipated. If we had the right gear, we could’ve done the hike. We saw plenty of true alpinisti up there. But, we travel light, so we just had our normal hiking shoes and day packs.

We met a fun group from the Abruzzo hiking group who were going to the top of the peak. They had ropes, hiking poles, ice picks and plenty of snacks. They also brought along the Italian flag for photo ops at the top.

The modern funicular makes it easy to take a pleasant day hike close to Corno Grande. It’s a scenic, eight-minute ride up the steep rise to the infamous Rifugio Campo Imperatore, that Mussolini had built in 1939. The massive dining room is in the shape of a D for Duce. But, in 1943, the Duce was kept prisoner there after being arrested and captured by the Italian King’s forces. However, after just a few weeks, the Germans intercepted a coded message and used gliders to fly in to free Mussolini. It was a daring operation that provided Mussolini a short escape before he was captured again by the Partisans in April, 1945 near Lake Como.

These days the hotel is a popular place to stay for skiers in the winter and hikers in the summer. For us, it was a nice spot to have a quick espresso before our short, but steep hike up to the Rifugio Duca. This hike takes only about 40 minutes from the Campo Imperatore. It’s a good trail, but exposed all the way, so bring your sunscreen. In early May, we had to cross a few patches of snow, that were slushy and slippery at times. When we reached the rifugio, we could see that the rest of the trail was covered with snow. We even ran into a few cross-country skiers.

However, next to the refuge, there was a nice place to rest, have a snack and take pictures of the surrounding mountains. Even with the snowy trail, we could see at least 20 hikers who had reached the top of the peak. This is probably a popular destination in the middle of the hiking season. Once you get to these altitudes, there’s a better chance that you might spy one of the elusive Abruzzi Chamois, once an endangered species. In the 1990s the park introduced new Chamois and the herd has increased to almost 100 in the Grand Sasso Park. 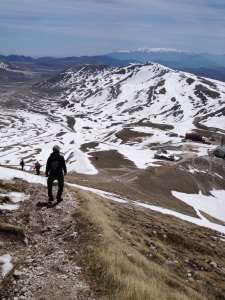 Views on the way down

Whether you are a serious hiker or you simply enjoy nature, Gran Sasso Park has a lot to offer. For more information, check out their website at: http://www.parks.it/parco.nazionale.gran.sasso

I am an artist, writer and desktop publishing consultant living in the Pacific Northwest. After our first visit to Italy, my husband Bob and I have found ways to spend more and more time there and other countries in Europe. We love to travel, but especially to stay in one area and get a better sense of place. I love learning languages, so I continue to study Italian, French and Spanish so I can communicate a bit more with the locals. Even learning the basic greetings can make a big difference.
View all posts by msraaka →
This entry was posted in Abruzzo, Travel and tagged day hikes, Gran Sasso Park, Hiking, Il Corno Grande. Bookmark the permalink.

4 Responses to Abruzzo & the Gran Sasso