In the Land of Matilde 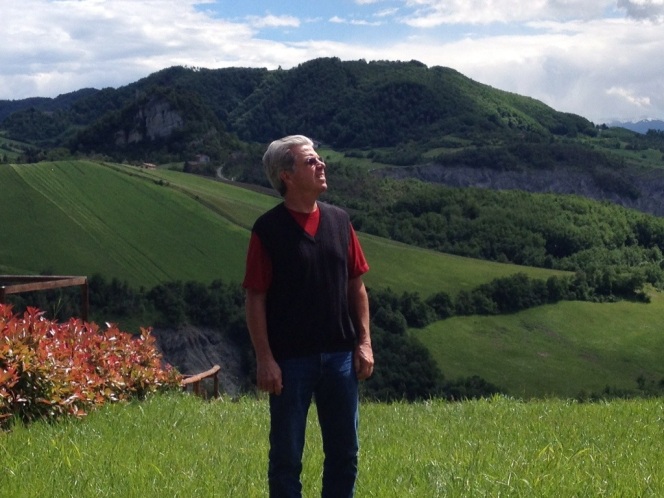 The hills near Canossa

The city of Reggio nell’Emilia is located in the Pianura Padana, a huge flat valley between the Dolomites in the north and the Apennine Range to the south. As I’ve mentioned before, there are many interesting cities within easy reach using the efficient train system in Italy. But, sometimes it’s nice to get out of the city and enjoy some quiet time in nature. On this trip, we found two new options for us—head north with your bike to the Po River or head south towards the mountains. Last week, we chose the latter.
From the center of Reggio, it takes only about twenty minutes before you reach the picturesque villages and old castles nestled in the hillsides that climb up to the mountains. This area, along the edge of the Apennines is known as the Land of Matilde. 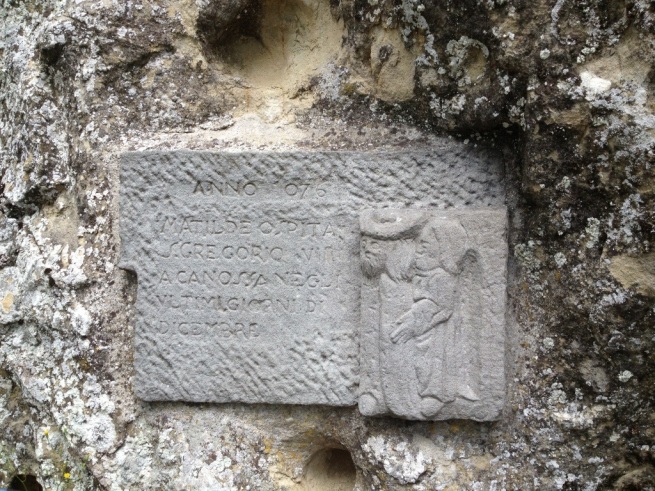 Queen Matilde of Canossa was a woman quite ahead of her time. She was independent, strong-willed and a clever negotiator. In the middle of the ninth century, she inherited a large chunk of Italy that included the region of Emilia Romagna, parts of Lombardy and most of western Tuscany. As a young girl, she witnessed the brutal death of her father, King Boniface III, which gave her the strength and determination to become one of Italy’s most successful rulers. She was a wise and intelligent leader who was known for her negotiation skills. But, she was also trained in the military arts, which she was forced to use against the constant battles with King Henry IV of Germany. Apparently, the king really wanted her land and thought it wouldn’t be too hard to battle against a woman. But Matilde used her wits and some special tactics to beat him every time. In fact, her total defeat of King Henry marked the first time that an Italian Army had defeated an invading German Army.
Matilde was a big supporter of Rome (the Catholic Church and her good friend Pope Gregory VII) and considered an important keeper of the faith. For this reason, she was the first person that was not a saint or a pope, to be buried in St. Peter’s Basilica. She’s also one of only two women buried there. 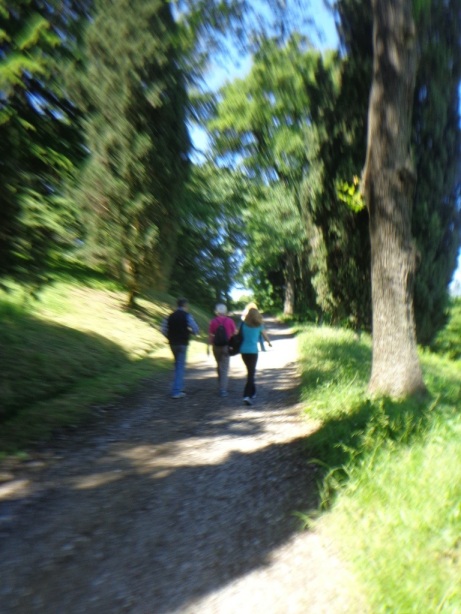 walking in the countryside

We spent a sunny Sunday in May exploring Matilde’s countryside, thanks to our good friends, Paola and Corrado. Before we drove up into the hills, we stopped by one of the local wineries for a pleasant walk among the vineyards. When the weather warms up, many of the wineries offer special tastings and art for the weekend. It was a little too early to sip wine, so we walked the grounds and enjoyed the views of the vineyards below.
But our final destination was Canossa, further up into the hills, where our friends have a lovely weekend home with spectacular views of open pastures, farmers’ fields and the Apennine Mountains in the distance. After a delicious and leisurely lunch on the covered patio, we walked to one of Matilde’s castles for a closer look. At the base of the castle, there’s a small reception area with lots of books and information on the history of the area. There’s also an excellent film (upstairs) that can be shown in several languages, including English. It gives a great overview of the area and tells the story of Matilde. 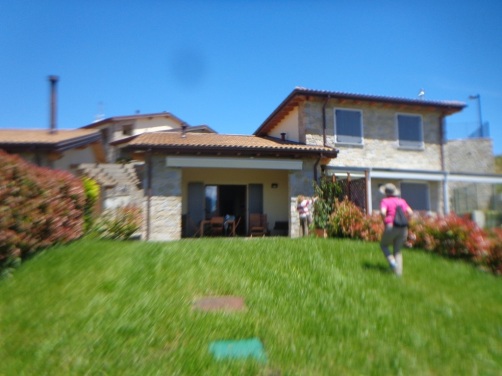 The House in Canossa

Lunch on the Patio 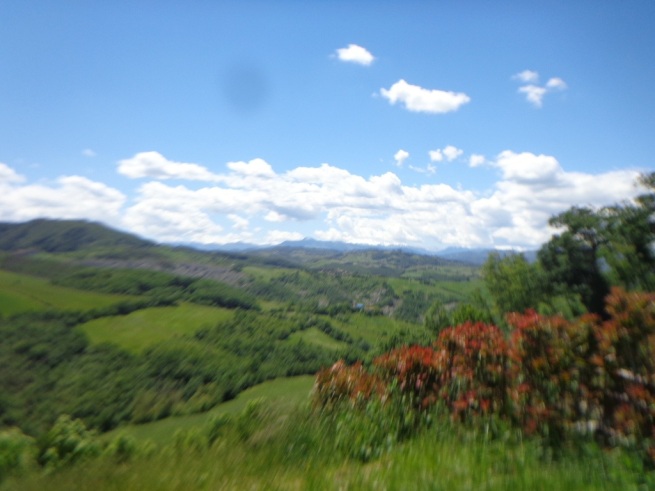 Outside, there’s an easy walk up into the ruins of the castle with views of the surrounding countryside dotted with small villages and several more of Matilda’s castles. During those times, it was important to have each castle on a hill so that it could be seen by the previous castle. In this way, they could signal each other when the enemy was coming (which happened quite frequently in those days). In late May, 2013, the hills were a verdant green thanks to the wet spring we had. But even in the summertime, the air is cooler here thanks to the pleasant breezes that pass through these mountains.
If you visit this area in May, you might happen upon a local celebration. Each year, the town of Quattro Castella celebrates the coronation of Queen Matilde with a weekend of festivities. The locals dress in colorful costumes and the Queen presides over the events. There are plenty of reenactments and of course, a colorful parade through the town and lots of good food. For more information on the Matilde Trail try this helpful website: http://www.appenninoreggiano.it/

I am an artist, writer and desktop publishing consultant living in the Pacific Northwest. After our first visit to Italy, my husband Bob and I have found ways to spend more and more time there and other countries in Europe. We love to travel, but especially to stay in one area and get a better sense of place. I love learning languages, so I continue to study Italian, French and Spanish so I can communicate a bit more with the locals. Even learning the basic greetings can make a big difference.
View all posts by msraaka →
This entry was posted in Emilia Romagna, Travel and tagged Canossa, Matilde of Canossa, Reggio Emilia. Bookmark the permalink.