A Day Trip to Bologna 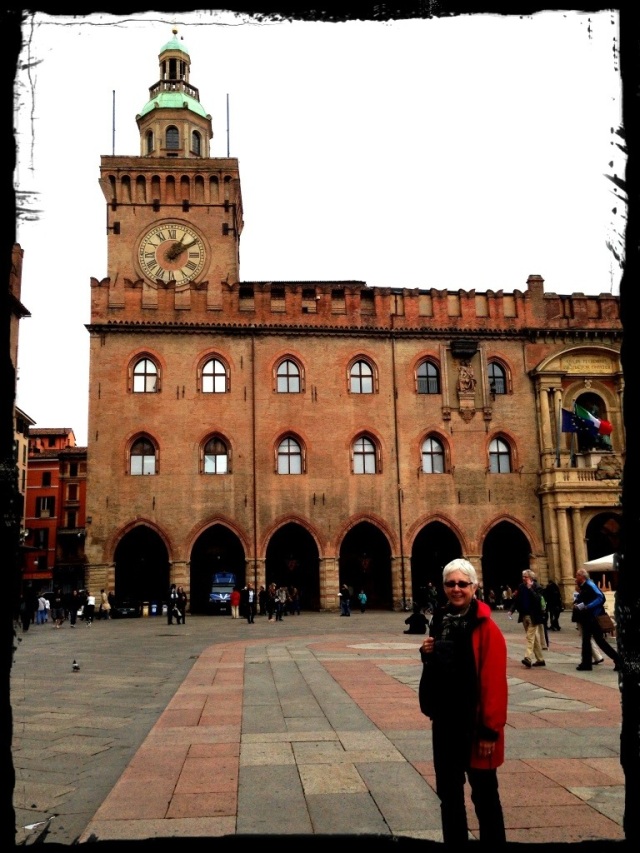 Piazza Maggiore in Bologna
The nice thing about renting our apartment in Reggio, is the convenience of being able to take short train trips to many interesting places nearby. One of our favorite cities is Bologna, which is about 40 minutes on the cheaper train, the “Regionale”. If you need to get there in thirty minutes, there’s a faster and more expensive train called the Frecciarossa that travels on the high speed tracks.
Sometimes these faster trains are worth the price and other times it’s just as easy to take a more local train (always choose second class). When we don’t have much luggage and the distance is short, there’s no reason to take the “fast” train. For instance, our local train to Parma takes two minutes longer than the fast one. 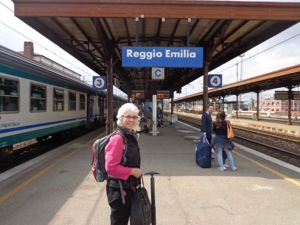 The current train station for the local trains 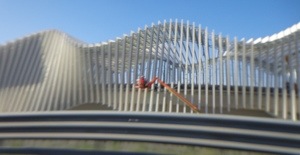 The new high speed station is almost ready for travelers
But, back to Bologna, our neighbor to the east. We decided to rendezvous with my good friend Sue in this beautiful city known for its food and covered walkways. Like most cities along the old Via Emilia—the ancient Roman Way, the old city center is an easy walk from the train station. You can stroll up the main Via dell’Indipendenza, or choose a quieter side street. No matter which way you go, you’ll find an interesting mix of medieval, renaissance and baroque architecture, with a pleasing palette of colors. Compared to some old city centers, Bologna seems to have some wider streets and several large piazzas that keep it from being too dark and gloomy.

The Piazza San Stefano
The Piazza Maggiore is quite grand, with the main Cathedral, the old town hall and a large statue of Neptune that serves as the perfect meeting point when we need one. There is always plenty of activity on this popular piazza that is strategically located in the center of the city. A large and helpful tourist center is also on the square. Spend some time in the tourist center to make sure you don’t miss a special exhibition or one of the many music, theatre or dance events. They can also tell you which bus takes you to a lovely portico covered walkway that climbs up to the Sanctuary of Saint Lucy, with views of the city below. 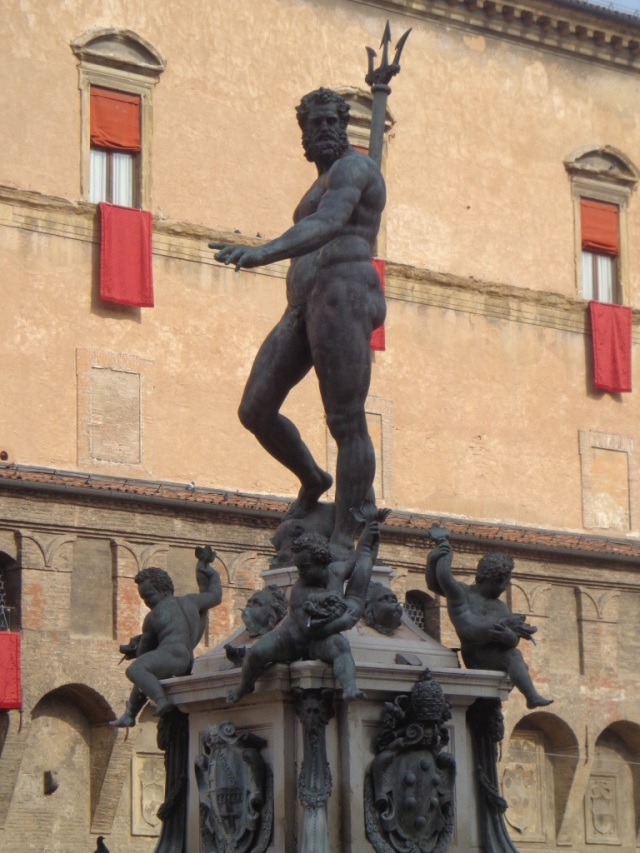 Our meeting spot is in front of King Neptune
Once you get your city map, it’s just a short stroll to the neighboring shops that have made Bologna a pilgrimage for the serious gourmet. From the piazza, head east and meander around the food stores and markets along Via Clavature, Via Pescherie Vecchio and Via dei Orefici. We always step inside A.F. Tamburini on Via Clavature 1, to taste some salami and just watch the activity. The same knowledgeable staff is always there and it’s fun to see them in action, cutting delicate slices of prosciutto or handling huge rounds of Parmigiano-Reggiano cheese.

Where the foodies shop 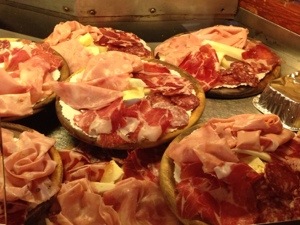 Snack plates in Tamburini
Even though the big store called Eataly, isn’t traditional, it’s worth checking out for the food items and an espresso break. It also has the largest collection of Italian cookbooks (in English) that we’ve found anywhere. If you need a certain Italian ingredient, you’ll probably find it there.
But take your time exploring these narrow streets and you may discover the small, local shops that have been selling their wares for decades, or even centuries. For instance, we found some excellent knives at Antica Aguzzeria del Cavallo, Via Drapperie, 12, which has been providing these essential tools for the chefs of Bologna since 1783. Just don’t go on a Monday when many of the more traditional shops and restaurants are closed.

Outdoor markets are nearby
When we can’t face another food shop, we wander further south, toward the University district. Bologna is home of the oldest university in Europe and one could spend the day just exploring this area of the city. There are several historic buildings to visit, including the Palazzo Pozzi, with a collection of interesting museums. It’s also fun to watch the students celebrate a graduation almost anywhere near the university. You also have a good chance of running into a political rally or parade.

A Parade in May
Nearby, you can find the two most famous towers of the city and marvel how the shorter, leaning tower hasn’t fallen down. If you like to climb stairs and aren’t claustrophobic, the taller Torre degli Asinelli is open to the public.
Like every large city in Italy, there’s no shortage of churches in Bologna. The large cathedral of St. Petronius in Piazza Maggiore is worth a visit for several reasons. It has several nice frescos and an interesting sundial that stretches over 200 feet across the church floor. Although it’s a very large basilica, it was never finished due to some disagreements between the pope and the city fathers—the original plan would have made it bigger than Saint Peter’s Basilica in Rome.

The Churches in Piazza San Stefano
But a smaller Medieval church called San Stefano is part of a group of several churches, including the oldest church in Bologna, called Santa Vitale e Agricola. There were originally seven churches, but only four churches and a small cloister remain. We like the Chiesa del Santo Sepolcro, which is an austere octagonal church with old inscriptions carved into the walls and floors. The Piazza San Stefano, outside, is a pleasant and tranquil spot for a break from touring the city.

Inside Santo Sepolcro
Bologna is a great city for walking and exploring. Take a side street and you will discover a new neighborhood with an interesting gallery or a great restaurant. One day we discovered that Bologna had a canal! Whenever we wander, in the city called La Grassa, “the fat one”, we find something new and of course, we never go home hungry. 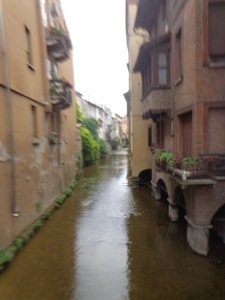 I am an artist, writer and desktop publishing consultant living in the Pacific Northwest. After our first visit to Italy, my husband Bob and I have found ways to spend more and more time there and other countries in Europe. We love to travel, but especially to stay in one area and get a better sense of place. I love learning languages, so I continue to study Italian, French and Spanish so I can communicate a bit more with the locals. Even learning the basic greetings can make a big difference.
View all posts by msraaka →
This entry was posted in Emilia Romagna, Travel and tagged Bologna, Slow Food. Bookmark the permalink.