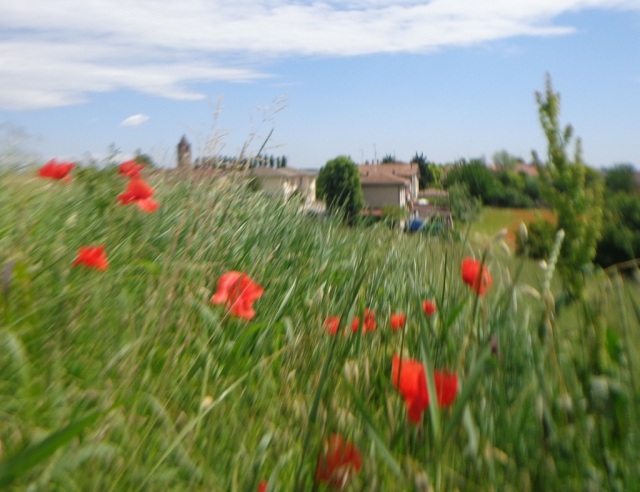 Along the Po River
Because my husband continues to resist using a GPS, we depend on our handheld paper maps that we still find at bookstores in America and Italy. But for this short adventure on our bicycles, we only consulted a few websites and decided to trust our instincts. A handy website for the abundant bicycle trails in Italy is Piste Ciclabili:
http://www.piste-ciclabili.com/ Be sure to click on the British flag to read it in English.

At first the site may be confusing because it lists the trails according to each region in Italy. Once you learn the name of your particular region, and your province, you need to learn the names of some towns in the area you hope to explore. This isn’t easy if you’ve never been there. However, we had read about some nice trails along the Po River, so I found a town close to Reggio and decided we could wing it from there. 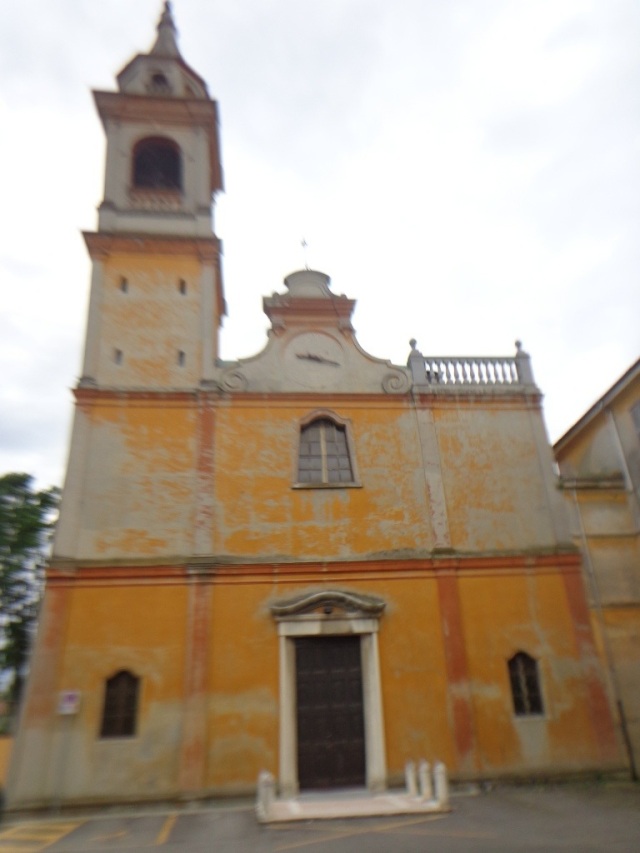 Guastalla
We started in Guastalla, a picturesque town just below the Po. On Saturday morning, it was market day and there was lots to see. The big fruit and vegetable truck was especially tempting. We asked the first person on a bike where the “pista ciclabile” was and we were directed towards the river. Once we got close, we saw plenty of cyclists and joggers headed in the same direction.

The Po River Bike Path
The entire trail is about 80 kilometers, but we only did about 50 kilometers in all. We were glad that we had rented mountain bikes because the trail was rough gravel in several sections. It also had a few sections of dirt that were quite muddy due to a very wet spring here. But there were also paved sections and almost all of the trail was up on a levy that provided nice views of the countryside, the giant poplars and the quaint towns along the way. 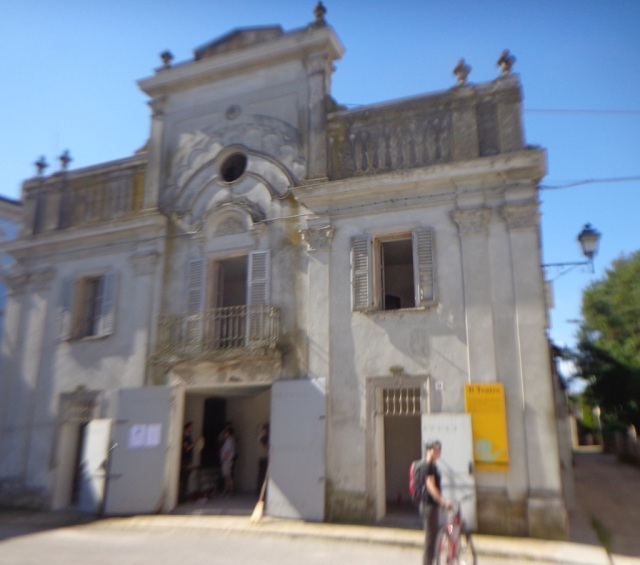 The old theatre in Luzzara
We took a side trip to the town of Luzzara because I had learned that it was the town where the famous film, 1900, by Bernardo Bertolucci was filmed. It’s a small town with just a few piazzas and churches. As we walked our bikes along a main street, a nice man asked us if we knew about the bike fair that weekend. He gave us directions to the piazza and told us about it. He was so polite and professional that we decided he was either the mayor or the head of their tourist bureau.

Once we entered the Piazza del Teatro, we found a beautiful old theater with lots of activity. A group of local volunteers was busy cleaning up the interior for the afternoon activities. As we came closer to get a peak inside, we were immediately invited to have a short tour. The man in charge took us around and told us the history of the theater and what the restoration project was. The theater, which was built in the early 1800s, had been abandoned after WWII. Just recently, a group of volunteers decided to restore the building so that Luzzara could have live theatre again. They’ve just begun the project and have a lot more work to do. 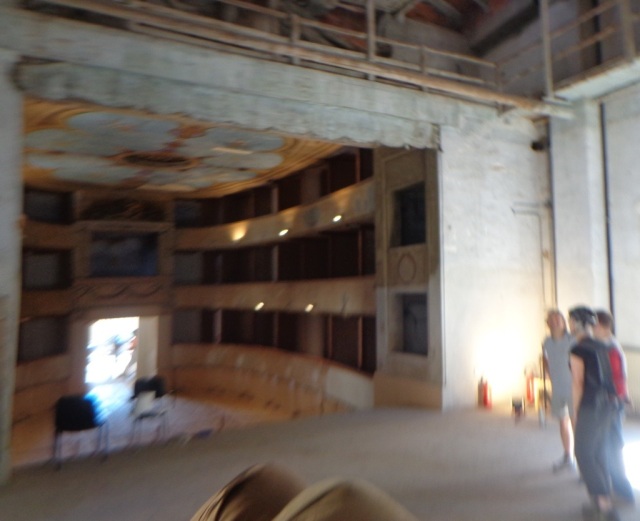 The interior of the theatre
It helped that I spoke Italian, but there were several people who spoke English. When they found out that we knew about the movie, 1900, they told us even more stories about their town. We stayed more than an hour visiting and learning about the theater, the nearby church and Paul Strand, the American photographer who published his book, A Village, with photographs of the town back in 1956. His black and white portrait of the Lusetti Family is in the Getty Museum in Los Angeles.

An old homestead
We could’ve hung out all day in Luzzara, but we had some riding to do. So we got back on our bikes and hit the road. We found the trail and followed it for quite awhile until a big fence blocked our passage. Without a map, we headed into the small village nearby and asked the first person how to continue. They pointed the way, so after a few miles past dairies and old farms, we were back on the trail. However, one old farm looked just like the setting in Bertolucci’s film, so we stopped for a picture.

We went as far as Mottegiana, which is not really a town, but it has one bar and a pizzeria that wasn’t open for Saturday lunches. So we settled on the bar, which had decent panini and a friendly owner. He couldn’t figure out why we were staying in Reggio Emilia—like everyone else in Italy, but I didn’t have the energy to explain it. Maybe he should read my blog some day. 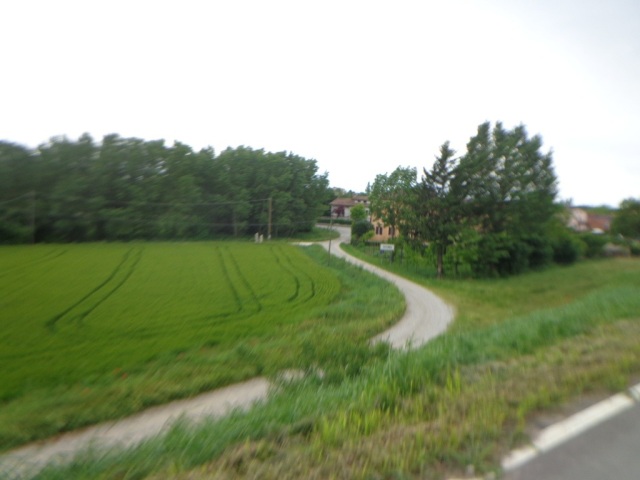 La Pista Ciclabile
The weather was starting to change, so we decided to head back to Guastalla, our starting point. The winds were picking up and the gravely paths seemed a bit harder on the return. But we knew that our chances for finding gelato were good, so we carried on. When we finally reached the old city center of Guastalla, it was about three o’clock—siesta time for almost everyone. The market was packing up and only a few cyclists were on the streets. But fortunately for us, the K2 Gelateria was open and we had stumbled onto another excellent gelato shop.

Great Gelato isn’t hard to find
Some of our best adventures take place when we don’t have a set plan and we take the time to just wander about. Every town has a story, and the people in the smaller towns seem to have more time to tell them. I know we are very lucky to have the opportunity to explore the back roads of Italy—and sometimes the best way is without a map.

We did use this map that we found on the trail

I am an artist, writer and desktop publishing consultant living in the Pacific Northwest. After our first visit to Italy, my husband Bob and I have found ways to spend more and more time there and other countries in Europe. We love to travel, but especially to stay in one area and get a better sense of place. I love learning languages, so I continue to study Italian, French and Spanish so I can communicate a bit more with the locals. Even learning the basic greetings can make a big difference.
View all posts by msraaka →
This entry was posted in Emilia Romagna, Travel and tagged bicycling. Po River, Guastalla, Luzzara, Paul Strand, piste ciclabili. Bookmark the permalink.

6 Responses to Without a Map