Sorrento, Italy
Throughout Italy it’s possible to stumble into an artisan’s workshop or find a small museum where you can meet some interesting people and learn about their passions. We’ve had some great encounters in several towns—both in the south and the north.
Our first discovery was in Sorrento, just south of Naples, on the Amalfi Coast. While walking down a narrow road that led to the fisherman’s harbor, we spotted a workshop full of beautiful wooden boats in various states of construction. There was only one elderly man working that day, so I asked if we could enter the shop to get a closer look at the boats. If you don’t know any Italian, you just say, “posso” which means “may I”. The gentleman encouraged us to come in to see the various handcrafted “gozzotto” fishing boats.

Anitco Cantieri del Legno
It turned out we were visiting with Aprea Cataldo, the current owner of a family boat building operation that began in 1760. I speak enough Italian to have simple conversations, so he began to give us a little history about his family and how he and his sons continue the same traditions that were started so long ago. Apparently, one branch of the family broke off to make fiberglass boats, but Aprea and his two sons continue making the same style of gozzotto that was first made in Sorrento by their ancestors. Although both sides of the family make exceptionally beautiful boats, we loved the more traditional fishing boats we saw in Aprea’s workshop. If you want to learn more, the website is: http://www.anticocantieredellegnoaprea.it/

A Scooter from Germany
Not far from the Linate Airport near Milan is the Lambretta Museum in Rodano. This private collection is open to the public by reservation. Although it’s full of beautifully restored Lambretta scooters, there’s even more. The owner, Vittorio Tessera, has collected a wide variety of scooters from all over the world. In fact, the first motorized scooter was actually made in the U.S. He also has two of the first Vespas ever made.

Scooter and Matching Poster
The museum is arranged so that you can see the scooters from various countries and eras. Along with the scooter collection, Vittorio collects the original advertisements and has them made into large posters which he displays behind each scooter. He also includes a short description that provides the complete name and model number along with a flag for the country of origin. But, you want to make sure that Vittorio is on site, because his extra commentary (in English) is great.

The Bicycle Room
After viewing over 100 different scooters, he took us into the last room that had about 20 vintage bicycles, including some of the first models ever made. Not only does he know how to refurbish scooters, but Vittorio finds time to search for parts and repair these antique bicycles. When he’s not giving a tour of the museum, he’s busy reproducing old scooter parts for Lambretta owners all over the world. The website for this fun spot is: http://lambrettamuseum.com/

Church of the Madonna di Ghisalo
We found out about the Lambretta Museum thanks to our friend, Brent, who rebuilds bicycles and scooters. He also wanted to visit Ghisallo Wooden Rims, a workshop where they build bicycle rims out of wood. With the help of the Internet, we found their location in Magreglio, near Lake Como. This was a pleasant drive from Reggio Emilia, by car, once you got away from the autostrada. The town is known for it’s steep and challenging climb and has been a bicycler’s mecca for many years. Besides the workshop, there is the Bicycle Museum and the church of the Madonna of Ghisallo. This church was built to honor the Virgin Mary, after she apparently saved a local from a band of robbers. Later, with the help of Pope Pious XII, she was declared the patron of cyclists. Inside the church are many mementos of cyclists who have died, along with the ruined bicycle of Fabio Casartelli, a native son who died in the Tour de France.

Museum of Cyclists
Next to the church is a very nice cyclists’ museum: http://www.museodelghisallo.it/
This is a very modern museum with lots of displays and history of many of the famous riders from Italy and around the world.

Making a bicycle rim
But our goal was to see the small workshop that still made wooden bicycle rims. We had emailed them about our visit, but we arrived late due to the traffic. Although the father, Giovanni Cermanati, didn’t speak English, his son, Antonio, is very fluent. However, Antonio was busy with some clients, so Giovanni found another colleague who did a great job translating. The company was founded by Giovanni’s father and some of the original machinery created for the specific task of making wooden bicycle rims was still in use. Giovanni, who is over 80 years old still works daily in the shop, which produces a wide variety of wooden accessories besides the rims. They make beautiful wooden handlebars, fenders, racks and even pedals. Giovanni pointed out some boxes stacked up to the ceiling that contained 50 wooden scooters (for children) that he had completed in the past few months.

Besides giving us a general tour of the workshop, Giovanni also demonstrated the method for making the wooden rims. Almost all of the items are made of birch from nearby Slovenia. It was amazing to see how he could bend the thin strips of wood and glue several together without breaking anything. Apparently the rims provide a very comfortable ride and hold up well. Although these rims are their main business, they also can make an entire bicycle out of wood. It was a beautiful bike and a comfortable ride, but I didn’t think it would be practical in Bellingham, Washington.

Giovanni showing Bob a wooden rim
We were also told that about fifty years ago, when the last few woodworkers switched to more modern materials, the family decided to stick to wood. It hasn’t been easy, but finally, there is a greater appreciation and understanding of the value of their products. Without families such as these, we would not have the opportunity to see true craftsmen at work. For me, it was thrilling just to observe Giovanni deftly handling every piece of machinery with such pride and joy. Here was yet another octogenarian still actively involved in his trade and happily showing up to work each day. I don’t know how far from work he lives, but he showed his bike, with wooden rims, of course. As we drove home along the picturesque roads above Lake Como, we decided that he had a pretty nice daily commute. 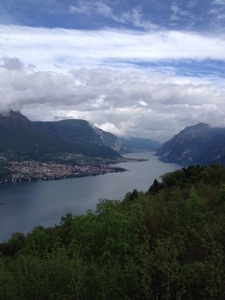 I am an artist, writer and desktop publishing consultant living in the Pacific Northwest. After our first visit to Italy, my husband Bob and I have found ways to spend more and more time there and other countries in Europe. We love to travel, but especially to stay in one area and get a better sense of place. I love learning languages, so I continue to study Italian, French and Spanish so I can communicate a bit more with the locals. Even learning the basic greetings can make a big difference.
View all posts by msraaka →
This entry was posted in Amalfi Coast, Lombardy, Travel and tagged Ghisallo, Ghisallo Wooden Rims, gozzotto, Lambretta Museum, Sorrento, wooden boats. Bookmark the permalink.