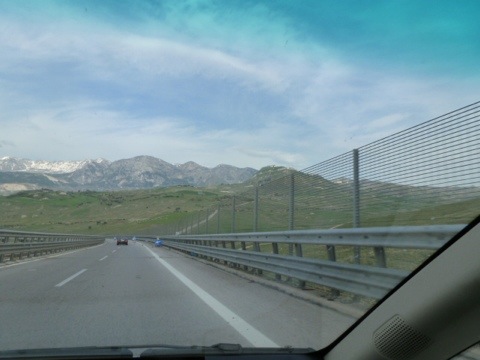 The autostrada near Cefalù

An American driving in Sicily is a brave person—no doubt. Besides the aggressive or crazy drivers, depending on your point of view, you have the challenge of road conditions and signage.
There are some very nice highways throughout the island, but they often literally disappear when you get near a town. Then, you must follow a non-existent path that snakes through the center of a city. This is when you notice that signage is quite different in this region of Italy. You might think that you should look for the name of the next town in the direction you’re headed. Sometimes this works. However, after a few blocks, the destination city might be the major city that is hundreds of miles away. And, because this island is a triangle shape that has roads on the coast or that cross the mountains, the sign for Catania can appear almost anywhere. It’s often a crap shoot.
The other challenge is that the signs are different colors. The blue signs are usually the major towns. The town you are looking for could be the faded brown sign with Ti Amo Maria scrolled all over it. The other things to get used to is that the signs are sporadic. Sometimes we drive for many blocks through a busy town without seeing any signs. Luckily, Bob uses the sun and his great sense of direction to get us through the more challenging parts. We are not too proud to stop and ask for directions, either. There’s a myth that Sicilians don’t speak real Italian, but even the old men can understand my basic Italian and I can understand them. They even throw in a little English when they can. The younger generation speak more English, but if they only speak Italian, they will probably speak too fast for the average tourist.
The drivers here are not that big of a problem, once you understand the unspoken rules of the road. First, you must be bold—if you hesitate, you’re done for. This works well when you know where you’re going, but that’s not always the case. We’ve learned to just pull off to the side of the road and regroup. On the roundabouts, nobody actually yields—everyone is actively negotiating their next move. But, if you just go with the flow, somehow, you don’t get hit.
There are very few streetlights in the towns and cities. Catania, the second largest city in Sicily, has a handful of real streetlights and very few stop signs. The streetlights are positioned so that you can hardly see them while you’re stopped. But as soon as the light changes, the cars behind you will start honking the horn so you know it’s time to move. The stop signs look like ours, but, like the white lines that divide the lanes, they are merely a suggestion for most drivers. It keeps us very alert when driving in the cities.
When traveling the main highways, it’s paramount to use your mirrors. If you leave even a few feet between you and the loaded truck you’re following, a car will start passing you and the truck—then decide to slip back in front of you when there’s not quite enough time to avoid the oncoming tour bus. Bob also watches out for the black Mercedes or Audis that come out of nowhere. If you aren’t alert, they can really surprise you.
It’s true that you can get away with speeding on the autostradas and main highways. But when you get into the cities and towns—slow down. The Polizia will stop you and hand out tickets. They also won’t hesitate to ticket any cars that are parked in the wrong spot. If you haven’t learned how to read the signs, just ask someone nearby if it’s OK (va bene?). The locals are great on helping tourists figure out their complex parking rules.
Although it sounds like too much work at times, driving in Sicily is not so bad. The autostradas are free and the scenery is always interesting—often breathtaking. Although most sane people would bring their GPS, we enjoy the adventures we face each time we get out on the road. We often are rewarded with unexpected surprises that make our travels all the more enjoyable.
The last photo was our reward for finding the town of Punta Seca (if you’re a fan of Montalbano)

When the highway ends 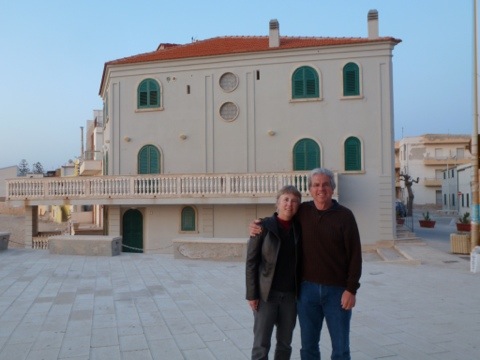 I am an artist, writer and desktop publishing consultant living in the Pacific Northwest. After our first visit to Italy, my husband Bob and I have found ways to spend more and more time there and other countries in Europe. We love to travel, but especially to stay in one area and get a better sense of place. I love learning languages, so I continue to study Italian, French and Spanish so I can communicate a bit more with the locals. Even learning the basic greetings can make a big difference.
View all posts by msraaka →
This entry was posted in Sicily. Bookmark the permalink.